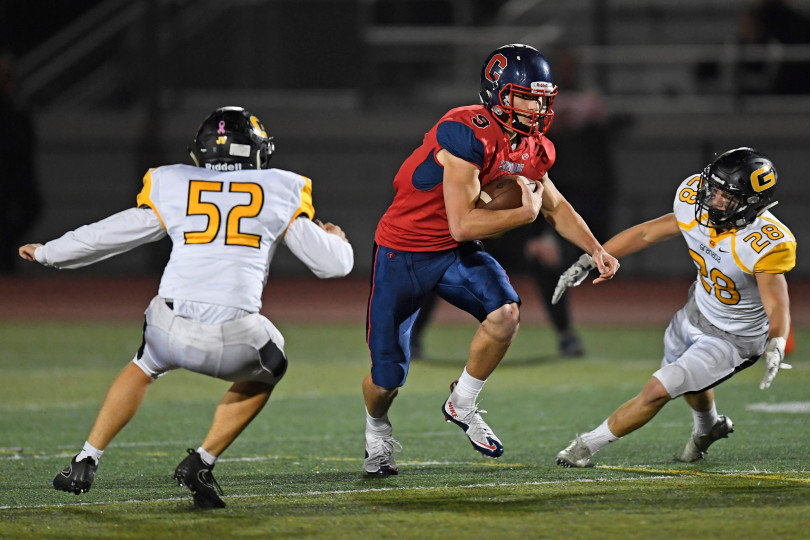 DUBLIN — Campolindo wide receiver Vince Mossotti said he and many of his teammates have been playing football together since middle school, and it looked like it.

The Cougars put on a clinic in the North Coast Section Division II title game Friday night and rolled past Granada 42-7.

It was 21-0 before Granada scored its only touchdown, and Campolindo (10-4) took the ensuing kickoff and marched 80 yards in 13 plays to make it 28-7, ending any hope for a competitive second half.

Quarterback John Torchio had a hand in all six Campo scores, throwing five touchdown passes and running over from the 1 for the other. Mossotti and Parker Windatt each caught two touchdown passes.

Campolindo will find out Sunday what team it will face in the NorCal Regionals. It will be the fourth straight trip to the NorCals for Campo, which looks ready to take on just about any opponent the seeding committee throws at it.

“We changed some things after the loss to Acalanes,” Cougars coach Kevin Macy said. “We played with more speed tonight.”

It was a dominating performance by the Cougars. They scored on all but one possession in the first half, and that was when they had a 19-yard field goal attempt blocked on the final play before intermission.

Campolindo resumed the second half right where it left off the first, scoring on its first two possessions after Granada turnovers.

The Cougars played a near perfect game, piling up a 496-237 advantage in total yardage, and causing four Granada turnovers, two on fumbles and two interceptions.

“He had such a learning curve,” Macy said of Torchio, who was in his first year as the starting quarterback. “He’s now at a point where he looks like a quarterback. He’s very calm back there and he can find his second and third receivers.”

Of course, it helps to have receivers like Mossotti and Windatt. Mossotti caught nine balls for 139 yards, all in the first half. Seven of Torchio’s first eight completions went to Mossotti. His touchdown catches were17 and 20 yards.

“Our game plan was to throw,” Mossotti said. “Their cornerbacks were playing off us and they were blitzing a lot.”

It will be interesting to see where Campolindo winds up next week. Although Division II has been maligned, the championship game pitting top-seed Campo against No. 2-seed Granada was legit.

The Matadors (9-5) play in the tough East Bay Athletic League and they came in riding a five-game winning streak.

Granada scored its only touchdown on a 50-yard run by Tommy Reeves in the second quarter. The Matadors had 195 yards rushing.

Macy wasn’t looking ahead to next week. He said he leaves that to his assistant coaches. But he did note that the Cougars “played up a little bit last year,” beating Palma-Salinas and Bakersfield Christian on the way to the CIF State 4A title.

There have been rumors that Campolindo could drop down to Division 5 if it gets to state this year, but Friday night’s performance should end that idea, even with four losses during the regular season.

Since the playoffs started, Campo is 4-0 with an average victory margin of 31.5 points. Yes, Division II was weak, but Granada was supposed to provide a little bit of a challenge. It didn’t. Now the Cougars could be looking at playing up a little bit this year too.