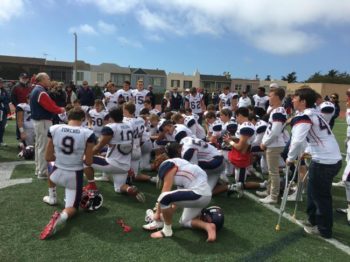 Loeliger carried the offense from the beginning. The first play from scrimmage saw Loeliger break a few tackles and run 76 yards for a very early Campolindo touchdown.

“The line was just blocking for me,” Loeliger said. “I just had more motivation this week to get the ball forward.”

Loeliger continued to dominate throughout the game, rushing for 194 yards and three touchdowns.

“Obviously, if we don’t have [Loeliger] – that game was closer than whatever the score says – and if we didn’t have him, we would’ve been struggling completely,” Campolindo coach Kevin Macy said. “He became the difference today offensively for us.”

Loeliger’s second rushing touchdown came early in the second quarter. His short four-yard score extended the Cougars’ lead to 21-7. Late in the third quarter, Loeliger ran 17 yards for his third touchdown – and Campolindo’s final touchdown – to put his team up 35-14.

“We’re an inexperienced group of kids,” Macy said. “We don’t have a lot of returners. So, I think for us just to keep finding a way to get better as we play, I think that was what was nice.”

But the Wildcats’ offense was silent in the second half, as the Campolindo defense held them scoreless.