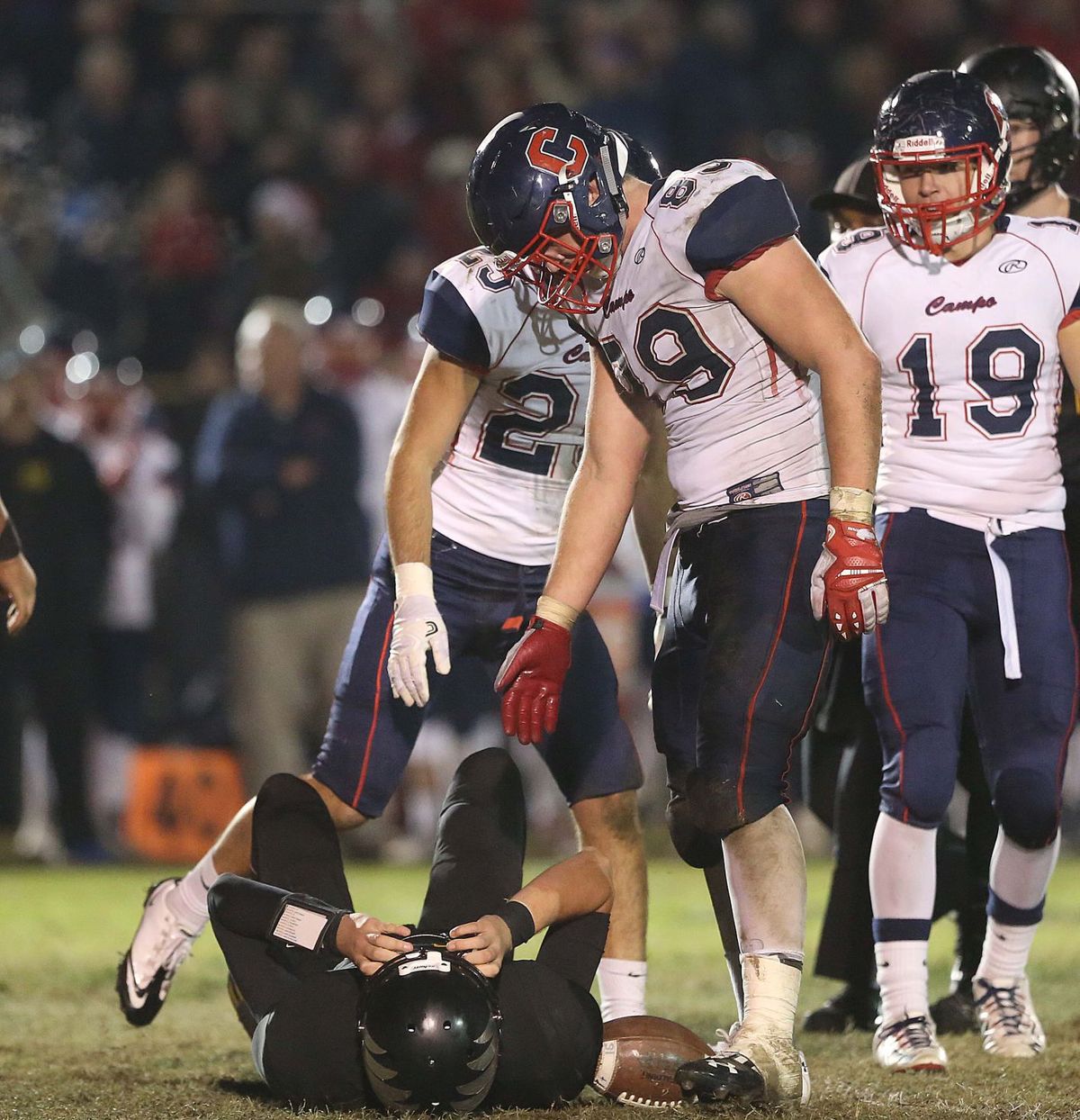 By Henry A Barrios, The Bakersfield Californian

In a postseason in which Bakersfield Christian seemed to find second-half magic every week, the Eagles finally stumbled on the biggest stage.

BCHS turned the ball over four times, including three in the second half, in a 31-7 loss to Moraga-Campolindo for the CIF State Division 4AA championship Saturday at Bakersfield Christian.

It is the second state title for Campolindo in three seasons and the second loss for BCHS in a state championship game in the past four years.

“That is a great football team,” BCHS head coach Darren Carr said of Campolindo. “Their first snap looks like their last snap. They went out there and took advantage of our fumbles, our interceptions, man. They didn’t shoot themselves in the foot. They kicked our butt.”

After Campolindo punted on the opening drive, Brock Holloway fumbled on the first offensive play for BCHS. Joey Berzins recovered for Campolindo.

On the opening kickoff of the second half, BCHS fumbled a short kick and Campolindo pounced again.

The Cougars scored seven plays later on a fourth-down 1-yard touchdown run from Branden Bocobo, and Campolindo never looked back.

“We came into this game saying we will need something different in terms of three or four kids having standout games that would separate themselves,” Campolindo coach Kevin Macy said.

One of them was John Torchio on defense.

The junior picked off two Braden Wingle passes in the second half that stalled any chance for BCHS to make another second-half comeback, like it did in beating Selma in the Southern California regional bowl game last week 28-27 after trailing 21-7 at the half.

“We knew (BCHS) passed the ball really well and we worked on covering the pass,” Torchio said. “Coach Macy’s game-planning is ridiculous.”

There seemed to be no argument on that fact from the BCHS side after the Eagles were held to their lowest scoring output in a game since 2012.

“Campolindo is a well-coached team,” BCHS offensive coordinator David Carr said. “They do the same thing every time on defense. But you have to be crisp on your routes and disciplined with your reads. We didn’t play a perfect game and that’s what it takes when you have four turnovers. A team like that can just run the clock out.”

It actually was a BCHS drive in the third quarter that took more than seven minutes off the clock, and that too cost the Eagles because they missed a field goal and came away scoreless after Campolindo took a 17-7 lead on the previous drive.

Wingle was 11-of-22 passing for 155 yards and became the record-holder on a 25-yard pass to Alex Wallace in the third quarter.

The pair also hooked up for a 28-yard touchdown pass in the first half when Wingle picked up a bouncing bad snap, eluded a defender and connected with Wallace on the run.

But Wingle was under pressure all night and never seemed to find a rhythm in a game the junior felt would be a lot easier than it was.

“When we watched (Campolindo) on film,we underestimated them,” Wingle said. “We came out thinking we were going to win this.”

For the Cougars, Jacob Westphal threw for 188 yards and two touchdowns, and Matthew Ringquist rushed for 97 yards and a score.

Foster had 10 interceptions, more than 1,600 receiving yards and 20 touchdown catches, but he was held to just two catches for 36 yards on offense.

“Even when there was one second on the clock, we were still saying ‘Finish,’” Foster said. “That’s our motto. No matter what, if the odds are stacked against you, long as you have faith in God and the people standing next to you, you’re going to persevere and be successful in life. I can’t say it enough: I’m proud of my team.”