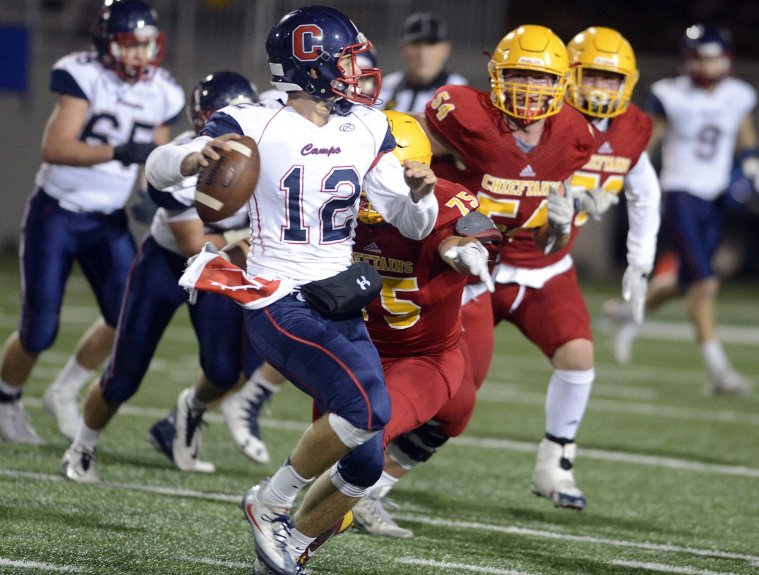 SALINAS — The Campolindo Cougars couldn’t get out of their own way in the first half, but that only helped make the redemption that much sweeter in the end.

The Cougars overcame four turnovers and pulled out a 30-21 win over Palma on Friday night to win the Northern California Division 4-AA Championship. They will Bakersfield Christian for the 4-AA state championship, site to be determined.

Coach Kevin Macy said he wanted his team to play up to their potential going into the game. A red zone fumble on the first drive quickly changed that mindset.

“We said playing up to our potential is not going to be enough. We need something special,” Macy said. “Unfortunately, we had a few steps backward in the first half.”

The fumble was immediately preceded by an 87-yard touchdown run by the Chieftains’ Emilio Martinez, putting Campolindo in a quick 7-0 hole.

Another red zone drive was thwarted by a penalty, resulting in a field goal. On the ensuing drive, John Torchio misjudged a punt that curved back on him, fumbling the ball and giving Palma possession deep in Cougars territory.

Six plays later, the Chieftains had another score and Campolindo was down 14-3, surrendering two scores on two turnovers.

“Normally, when you make a certain number of mistakes, you’re doomed,” said Macy. “Luckily we fought it off and came back.”

On its third straight drive into the red zone, Campolindo put it together. Quarterback Jacob Westphal completed six passes for 86 yards to lead a long drive that ended with a 1-yard run by Branden Bocobo for the score.

The Cougars took the lead for good when Westphal connected with Lev Garcia on an 11-yard score to cap a nine-play drive and go up 16-14 at halftime.

In the second half, Torchio got some atonement for his earlier mistake. He sniffed out a pass in the flats from Palma’s Zach Flores and picked it off, returning it 47-yards for a 23-14 Cougars lead.

“They kept hitting the flats. I told the corner on that side ‘We got ot pick one of those,” Torchio said.

The Cougars withstood a couple more fumbles that did not lead to points. The Chieftains got within two points when the score was 23-21 early in the fourth quarter.

Westphal then led a 14-play, 80-yard drive that ended with a touchdown reception to Kannah Cruickshank, who committed the first Cougars turnover that resulted in a touchdown.

“The mental stability of our team is incredible,” said Westphal, who finished with 28 completions for 418 yards and two touchdowns. “To be able to be down and come back is incredible.”

Macy said it all came down to what his players had inside themselves.

“This is not a team with a lot of depth and size, but just so much heart and fight,” said Macy. “Just so much fight in them. I can’t believe we’re in the position we’re in right now.”