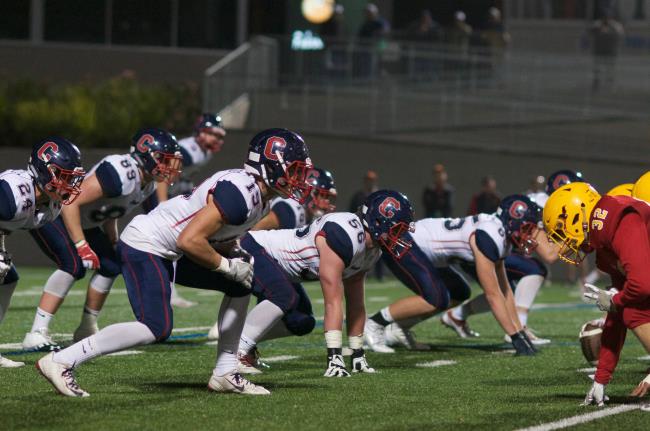 After dispatching Palma to earn its third straight trip to a CIF championship game, and fourth trip overall,  now faces a vastly different type of opponent at Bakersfield Christian, a 28-27 winner over Selma in the 4-AA South regional game.

The Eagles (13-1) may have edged past Selma to get to the championship game, but they have also scored more than 50 points on six different occasions this year, including a 53-19 win over Tulare Western in the Central Section Division 3 championship game.

“They’re like a video game offense, and it doesn’t bother them to fall behind,” said Campolindo coach Kevin Macy. “They can chuck it up and let their kids go, so everything has to be defended at an added depth. They have a tall quarterback with a strong arm, and lots of speed at receiver. They don’t care if they are covered, either, because they are great at making plays.”

Due to the explosive nature of Bakersfield Christian’s offense, Macy identified the ability to get pressure on junior quarterback Braden Wingle as a major key to the game, with athletes such as Joey Berzins and Justin Ehrenberger playing those big roles as pass-rush defenders.

That’s easier said than done against the 6-foot-5 Wingle, who has thrown for over 4,000 yards and 43 touchdowns this season. 6-foot-3 senior receiver Jerimiah Foster has been his top target, with 85 catches for 1,609 yards and 20 scores.

The Eagles have also shown the ability to thrive under pressure. In last week’s win over Selma, Stephen Figures intercepted a fake field goal attempt, returning it 77 yards for the game-winning touchdown. The score held up when the Eagles’ defense held Selma on a two-point conversion attempt with 1:02 remaining in the game.

That might be the biggest thing these two programs have in common – the ability to thrive against top competition, and in adverse situations. Campolindo (11-3) lost three players to injury in the North Coast Section Division 2 title game win over Windsor, but continued to persevere, despite thin numbers and a physical Palma team in the regional final.

“Most of our positions have not had backups all season long,” Macy commented. “Our five offensive linemen have been the miracle all year. A couple of them will take it easy this week to be able to play this weekend, but their toughness has been nothing short of amazing.”

Offensively, Campolindo will once again rely on the arm of senior quarterback Jacob Westphal, who threw for 402 yards in last week’s win over Palma. For the season, Westphal has thrown for 3,522 yards and 26 touchdowns.

“Everything has sort of fallen on Jacob. We have to find something on the ground, but a lot of it will still be on (Jacob),” Macy said. “He was incredible last week, and we need him to keep that hot hand going.”

Senior Matty Ringquist and junior Shun Ishida do provide options out of the backfield, but the receiving quartet of Vincent Mossotti, Kannah Cruickshank, Lev Garcia, and John Torchio will by far be the biggest concern of Bakersfield Christian’s defensive scheme.

Foster figures to play a large role for the Eagles on defense as well, where he has eight interceptions this year, along with Jordan Smith, who has four picks. Junior defensive lineman Jonah Rogers will be a challenge for the Cougars’ offensive line.

Regardless, these two perennial section powers should provide plenty of action through the air, and fans of a good passing game will no doubt be entertained by both offenses. Campolindo is seeking to repeat its 2014 state championship game win over El Capitan-Lakeside, while Bakersfield Christian is looking for the opposite result from its last state final appearance, a loss to Central Catholic-Modesto in the 2013 Division 4 title game.