Campolindo rolls past Concord to stay unbeaten in DAL play 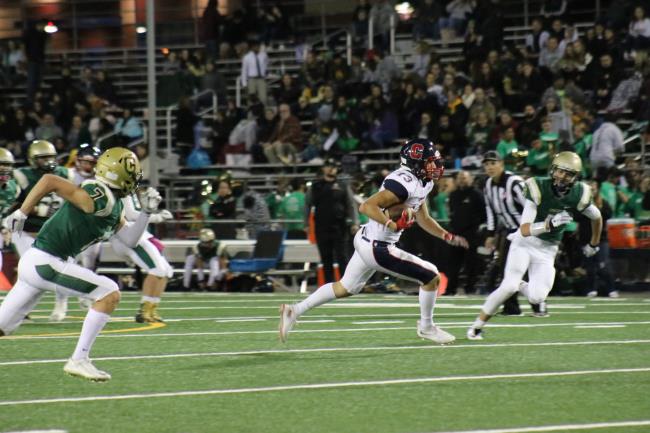 MARTINEZ, CA – Campolindo’s John Torchio had another impressive showing, completing 10 of 19 passes for 180 yards and three touchdowns in a 42-8 win over Concord at Alhambra High School on Friday night.

The Cougars (6-2, 3-0 DAL) struck first, midway through the second quarter, first on a 12-yard run from Kaleo Nelson, and then on a three-yard run from Kyle Leuteneker to cap back-to-back scoring drives. On the next Campolindo drive, Torchio showed his running capabilities with a 38 yard kick-return to the Minutemen 45-yard line. Torchio then threw a long pass to junior Lucas Allen for a 45 yard touchdown, increasing the Cougars’ lead 21-0 with 2:39 left in the half.

With under a minute left in the half, Torchio had another punt return into Concord territory, and capped off the drive with a 32-yard pass to Allen, and then a 16-yard touchdown pass to Parker Windatt with 13 seconds remaining, making the score 28-0 in favor of Campolindo.

Concord running back Austin Williams had a 30-yard kick return, which gave the Concord offense a good field position, but defensive plays from juniors Ian Concepcion and Paddo Buckley kept the host Minutemen scoreless in the first half.

The Cougars continued to increase their lead with a short touchdown pass from Torchio to Allen early in the third, and a 23-yard pass to Justin Ehrenberger from sophomore Grant Harper, increasing the Cougars’ lead to 42-0 after the third quarter.

The host Minutemen (1-6, 0-2) finally broke through the Cougars defense with a 39-yard touchdown pass from Ryan Murphy to Ben Daynes. Daynes also scored on a two-point conversion with 6:23 remaining in the game, cutting the score to 42-8.

“The defense needs to continue with tonight’s efforts in order to contain Acalanes” said Campolindo coach Kevin Macy. “Next week will be a match-up of two great quarterbacks, Torchio and Robby Rowell.”