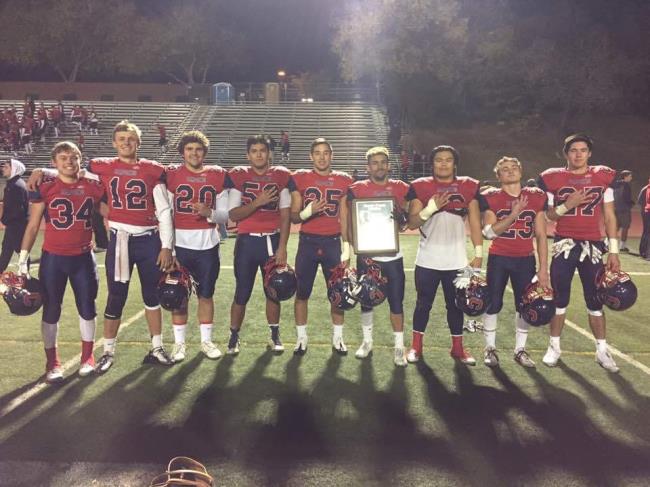 Trailing 13-6 in the second quarter, senior quarterback Jacob Westphal connected with junior receiver John Torchio from seven yards out to tie the game. The game-tying drive was extended after a roughing-the-kicker penalty against the Jaguars gave the Cougars a first-and-goal. Prior to that, it appeared that Campolindo may be settling for a third straight field goal, after Seppi Ortman drilled two earlier opportunities. The penalty, however, allowed the Cougars to tie the game, and they never looked back.

Windsor did counter with a 79-yard drive, but the Cougars’ defense held, and a missed field goal kept the Jaguars from re-taking the lead. Campolindo got the ball back with just over two minutes left in the first half, and Westphal wound up connecting with junior receiver Vincent Mossotti for an eight-yard score, giving Campolindo a 20-13 lead at halftime.

“When we were down, it was just because we weren’t executing,” Westphal said. “The only adjustment was to put our heads together and start to execute.”

The Cougars did just that early in the third quarter, putting the game out of reach with two quick possessions. They went 78 yards in 10 plays to open the second half, capped by a six-yard throw from Westphal to tight end Ray Berzins. Windsor fumbled on its next drive, and Campo went to its bag of tricks, in a somewhat familiar way, to extend the lead.

Torchio, who is also the team’s backup quarterback, threw a key touchdown pass in last year’s CIF regional win over Milpitas, and he did it again on Friday night. This time, Torchio caught a lateral from Westphal, then connected downfield with Lev Garcia for a 53-yard touchdown and a 21-point lead.

Windsor closed the gap before the end of the third, when senior signal-caller Kobe Roman connected with Jorgen Sarganis for an 11-yard touchdown, but Westphal hit Torchio for a 19-yard score in the fourth and the Cougars cruised the rest of the way.

Westphal finished the game with 284 yards and four touchdowns through the air, leading his team back to the CIF regional playoffs for the third straight year, and fourth time in program history.

“It’s a pretty incredible feeling to do this for three years in a row,” Westphal said. “Our success really has to be accredited to our composure, and that comes from experience in tight games.”

Earlier in the season, the Cougars suffered hard-fought losses to eventual CCS section champion Valley Christian and Oakdale, who won the Sac-Joaquin Division 3 title on Friday night. That experience helped in a come-from-behind win over Miramonte during league play, and now again in the biggest game of the season.

Torchio led a trio of Cougar receivers who had a big game on Friday, with seven catches for 85 yards and two scores receiving, plus the touchdown pass. Garcia had four catches for 118 yards and a score, while Mossotti had five grabs for 101 yards.

Roman led Windsor’s offense with 223 yards and three touchdowns through the air, but the usually-potent Jaguars’ running game was held in check by the Campolindo defense. The two scores which gave Windsor the lead also came through the air, as Roman connected with Patrick Tappin for a 55-yard touchdown, and then to Marcell Sands for a 44-yard touchdown, one which gave the Jaguars their early seven-point lead.

Campolindo now awaits its placement in the CIF regional playoffs, which will be announced on Sunday.