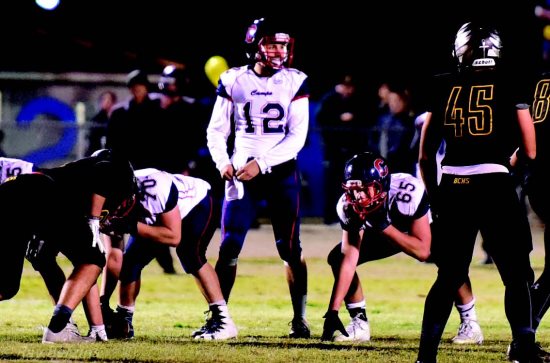 On the bus ride home, after the Campolindo football team had captured its second state title in three seasons, head coach Kevin Macy was struck by how calm everyone seemed.

“I think we just went through so much this year,” Macy said after the Cougars raced past Bakersfield Christian, 31-7, on Dec. 17 to clinch the CIF Division 4AA state title. “I don’t know if you call it adversity. I don’t know if you get that dramatic about it, but we had a lot of setbacks.”

“It seemed like it just was a year of a lot of battles,” Macy added. “And I don’t know, maybe that just made us battle-tested, just emotionally hardened a little bit.”

In the bowl-game beat down, senior quarterback Jacob Westphal threw a pair of touchdowns, junior John Torchio popped up all over the field and senior Joey Berzins anchored the defense.

“We had enough of a running game. We protected the ball. Jacob made key passes,” Macy said. “And so, it was just a gutty performance by all the kids. Everyone stepped up to contribute. Across the board, we’ve never had that many kids have such an impact on the game.”

Macy credited Westphal with setting the tone for the rest of the team – especially the offense, which featured a 100-yard and one-touchdown performance by senior running back Matthew Ringquist.

“Of course, Jacob was solid as he always is,” Macy said. “That’s the one constant we’ve always had. And I think with Jacob sort of being that person who the kids look at to be stable, and just always consistent, I think it helps all of the other kids elevate themselves. They sort of rally around him.”

Torchio, who’s set to replace Westphal at quarterback next fall, impacted the state title game as a free safety, receiver and punt returner.

“He’s just a kid that knows how to play the game,” Macy said. “He’s not a burner. He’s not overly big. He’s not overly powerful, but he’s heady. He’s efficient and will always get you a little extra with whatever he’s doing.”

Against Bakersfield, Torchio caught a touchdown and hauled in a pair of interceptions. Berzins – a tight end and defensive end for the Cougars – recovered a fumble on a day when Campolindo produced four turnovers. Three of the team’s takeaways came in the second half when Campolindo blanked Bakersfield 21-0.

“He was an animal out there,” Macy said of Berzins. “The defense played well, but Joey was definitely the force that they struggled with.”

The Cougars traveled a challenging road to the 4AA title, besting Palma of Salinas, 30-21, at Rabobank Stadium on Dec. 9 before paying a visit to Bakersfield.

“Looking at playing two private school powers didn’t look like, on paper, it was going to be favorable to us. But at least it gave us respectable opponents. I mean, first-class opponents and we played in some neat venues. The Palma venue was incredible – their little municipal stadium that they have,” Macy said. “And Bakersfield, even though we were playing at their high school, they did it right.”

Before loading onto the bus for the ride home, an unusual scene unfolded on the field in Bakersfield. Cougars’ players and staff members swarmed the Bakersfield coaches – Darren and David Carr, the siblings of the Oakland Raiders quarterback Derek. Darren is the head coach and David is the offensive coordinator.

“A lot of our kids and coaches wanted to go take pictures with the Carr brothers afterwards because it’s like celebrities in the house,” Macy said.

With rumors swirling that Derek would make an appearance, fans buzzed around the stadium looking for the Raider. Ultimately, the MVP contender missed out as he was in San Diego preparing for a game against the Chargers.

“The Carr brothers were great,” Macy said. “The program was great. Their kids were great.”