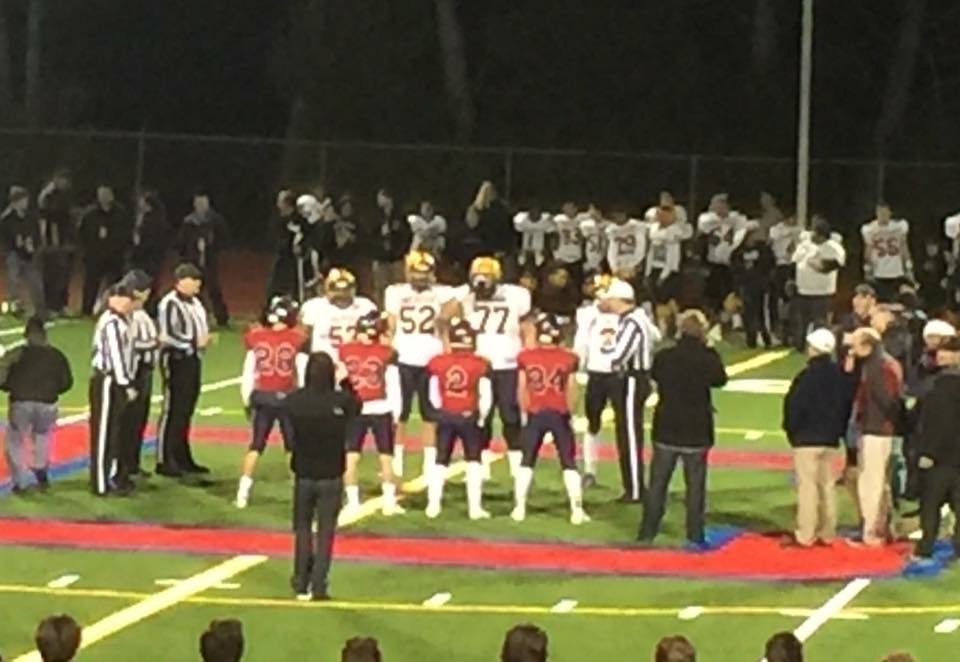 MORAGA, Calif. — Chalk one up for David or Rudy or any other diminutive figure facing large challenges.

The football team at Campolindo (Moraga), a juggernaut of a medium-sized program, defeated a bigger, faster and more athletic Milpitas squad 27-24 on a 32-yard field goal by Matthew Blair with 26 seconds to play Friday night in a CIF North Region 3-AA title game.

In the end, a trick play, two long touchdown catches and key fumble recovery by Madison Young, the kicking of Blair and one clutch interception and return by Dante DeLuca catapulted the Cougars back into a state title game against La Mirada in Southern California.

“We made it,” Campolindo coach Kevin Macy. “I wouldn’t have believed it had I not been there to see it.”

Macy was critical of CIF’s pairing of Campolindo, a school of 1,260 students, against Milpitas, with more than 3,000, in the state’s new 13-bowl, competitive model. The previous model was based on enrollment.

The highly successful coach, who led his program to its third bowl game in five seasons and gone 55-5 in the process, was confident the Cougars would compete and could win Friday, but didn’t think it was fair for his under-sized squad to take such a physical pounding.

“You can’t tell me what we’re going to put on the field compared to what they put on the field is part of any concern over player safety or competitive-equity formula,” Macy said during the week. “We don’t have the size and mass to play all these big schools. It takes a toll on the smaller schools. The big schools like Milpitas can platoon. We simply don’t have that kind of depth.

“My issue isn’t with Milpitas; it’s with the system. What do you think Milpitas would say if they had to play a school with an enrollment with 7,500?”

To make his point before the game, Macy sent four of his smallest players, while Milpitas sent, among others Washington State-bound Christian Haangana (6-foot-7, 380 pounds) and Toa Iafeta (6-4, 270).

At the coin toss, Campolindo coach Kevin Macy made sure his Cougars (in red) were looking up at Milpitas.

“They aren’t our big stars, but they all play a considerable amount,” Macy said. “But yes, I wanted to make a point.”

In the end, the biggest point the Cougars made was they always seem to come up big – at the largest time.

The same squad that scored 28 unanswered points in the final 12:45 of last year’s 35-28 state-title win over El Capitan-Lakeside, was tied at 24-24 when with just more than minute to go DeLuca intercepted a Oliver Svirsky pass and returned 40 yards to the Milpitas 28.

A personal foul call on the tackle, moved the ball to the 14 and three plays later, Blair, who booted six straight kickoffs into the end zone, split the uprights.

“I knew I had to make a play,” DeLuca said of his interception and return. “Milpitas is a great t team and was moving the ball most of the night. I just saw the ball, caught it and ran as fast as I could the other way.”

Milpitas (10-4) took a 17-14 lead early in the third quarter on a 36 yard field goal by Cesar Silva. Not only did the Trojans take the lead, but they appeared to be winning the game of attrition and certainly physicality. The Trojans outgained Campolindo 320-297.

But, like they normally do, the Cougars responded when it appeared they had little left.

Campolindo took its first lead since early in the first quarter 21-17 on a terrific play call when John Torchio took a backward pass from quarterback Jacob Westphal and completed a pretty 59-yard touchdown bomb to Young streaking down the Campolindo sideline with 11:50 left in the fourth quarter.

Young, a 6-foot, 175-pound speedster, was everywhere all night and on Milpitas’ next play, he recovered a fumble, setting up a 20-yard field goal by Blair, who booted six kickoffs into the end zone. That gave Campolindo a 24-17 cushion.

It last only 15 seconds as Svirsky, who was dynamic all night by extending plays, found Devin Crummie with an 80-yard touchdown bomb, tying the game at 24-24.

Both teams turned the ball over in the final eight minutes, before DeLuca’s interception.

“Of all of (the clutch wins historically), that was perhaps the most unlikely,” said Campolindo coach Kevin Macy. “With all the mistakes and penalties we made to still win that game? We showed a lot of heart and perseverance.”

From there, Milpitas asserted its will up front, though its first score came on sheer finest.

Like he did all night, Svirsky scrambled around, bought lots of time, and eventually found Crummie at the 20 and the speedy receiver did the rest, evading a couple defenders before sprinting into the end zone, completing a 33-yard touchdown to tie the game at 7-7 with 1:13 left in the first.

After one of eight Campolindo penalties in the first half, Milpitas gook over at the Campolindo 29 and four plays later, Jarred Green powered it home from the 10. And we mean powered. He kept driving, Milpitas’ massive line kept driving and eventually Green got in the end zone, to put his team up 14-7 with 9:53 left in the half.

“Those guys were big and strong,” Deluca said. “But we never doubted ourselves.”

A long Campolindo drive ended in a fumble, Milpitas recovered, but after a couple long runs from super sophomore back Tariq Bracy (19 carries, 81 yards, four catches, 58 yards), Campolindo held and a punt snap was muffed.

Campolindo recovered at the Milpitas 20 and on the next play, Westphal hit Ringquist in the left flat. He raced untouched down the left sideline, to tie the game at 14-14 with 1:33 left in the half. Ringquist proved he wasn’t just window dressing at the coin flip.

“We’re awfully beat up,” Macy said. “But I’m sure we’ll patch ourselves together piece-by-piece and find the energy to take on another Division I school. Tonight, we just want to enjoy this a little bit.”